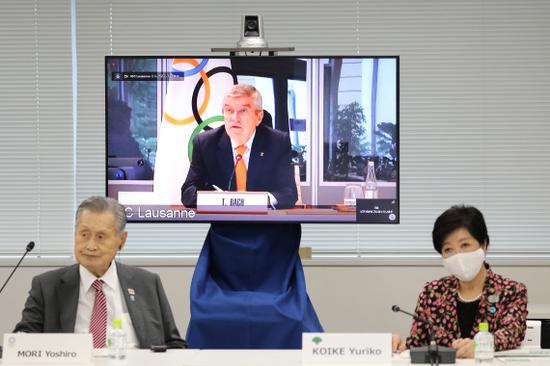 Xinhua News Agency, Tokyo, September 24 (Reporter Wang Zijiang) International Olympic Committee President Bach said on the 24th that the recent success of a series of international competitions shows that sports competitions can be held without a vaccine. The implication is that the Tokyo Olympics can also be held. .

The Tokyo Olympic Organizing Committee and the International Olympic Committee Coordinating Committee held a video conference on the same day to discuss the simplification of the Olympics next year. Before the meeting, Bach delivered a video speech from the IOC headquarters in Lausanne, expressing confidence in the success of the Olympic Games. .

But Bach also emphasized that many medical experts, including experts from the World Health Organization, told him that vaccines should be available in the first half of next year, which will provide greater convenience for the Olympics. He said that many vaccines are in the final stages of trials, and there are enough vaccines available for use worldwide next year. This is "encouraging news."

Of course, Bach also warned that the situation in the next 10 months is still difficult to predict, because hosting the Olympics depends not only on the epidemic prevention situation in Japan, but also on the situation of all the more than 200 IOC member units around the world. He called on all stakeholders to continue their efforts and do all their work just before the opening of the Olympic Games.

He said: "This crisis requires all of us to formulate flexible response measures, and it also requires us to make a lot of sacrifices. But I believe we can persist until the end and make the Olympics successful."

The Tokyo Olympic Organizing Committee Chairman Yoshiro Mori, Tokyo Governor Yuriko Koike, and Japanese Olympic Minister Seiko Hashimoto were present at the meeting in Tokyo. Bach greeted them one by one before his speech. Also participating in the video conference was Coates, chairman of the Tokyo Olympics Coordination Committee. The conference will be held for two days. After the conference on the 25th, the two parties may reach an agreement on more than 50 simplification measures.

Bach’s speech lasted 18 minutes. He called the phone conversation with Japan’s new Prime Minister Yoshihide Suga the previous day “friendly and fruitful”. Both he and Yoshihide Suga agreed to put the core issue on the “prevention measures” and said "Everyone is in the same boat and needs to row in the same direction."